Rosemary essential oil has long been associated with memory and remembrance. For example in Shakespeare’s Hamlet Ophelia says to her brother Laertes, ‘There’s rosemary, that’s for remembrance; pray/ Love, remember’ (Act IV, Scene 5). Although let’s not forget that this is declaimed shortly before she kills herself after going insane following the death of her father. However, maybe Ophelia was actually on to something as recent research at Northumbria University has shown.

Professor Mark Moss and his research group having been looking at the effect that inhaling rosemary essential oil has on future memory. Future memory is one of three types of memory that we have. Past memory is that which focuses on past actions and experiences; present memory is that which is working minute to minute and future memory is focused on remembering things in the future such as remembering to post a letter, phone the garage, bank a cheque – something that many of us could probably do with a little help with!

Currently modern medicine has made some advances into helping to improve the past memory of people suffering from dementia, but its efficacy is limited and these drugs would do nothing to help the rest of us. But so far there is no accepted medicinal method of helping to increase our future memory. And it is here that rosemary essential oil comes in.

In Professor Moss’ study, groups of participants aged 60 plus were recruited and asked to complete a series of tasks that would test their future memory in rooms that either contained rosemary essential oil vapour, lavender essential oil vapour or no scent. The results showed that those who were in the rosemary scented room did statistically significantly better that those in the scentless room and those in the lavender scented room actually performed worse in the tests. 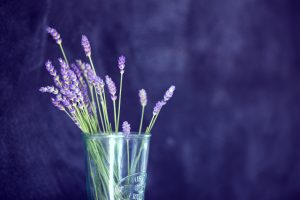 A member of the mint family and related to rosemary, sage, and thyme, it’s perhaps not surprising that lavender has been used in cooking for thousands of years. Used by the Romans to flavour fish and Medieval monks to add a floral touch to sweet puddings, over the course of the last century, the use… Read more »

What’s The Difference Between Lavender And Lavandin?

There are thought to be 35 different species of lavender (all from the genus lavandula). Here on the Jersey Lavender Farm we grow 2 of them, lavandula angustifolia (often known as English Lavender) and lavandula x intermedia (Lavandin or hybrid lavender). There are numerous varieties of both English Lavender (such as Hidcote, Munstead, Peter Pan and Royal… Read more »

How to use Lavender Oil For Sleep Problems

Getting a great night’s sleep is integral to your general mood and wellbeing, especially when it comes to tackling the many demands that come hand in hand with everyday life. After all, many day-to-day stresses can have an impact on your sleep pattern, especially if you have a demanding job or busy family life. And… Read more »

At this difficult and uncertain time we are acting in accordance with advice from the Government and the World Health Organisation.